I never thought that I'd be sending out notice that we have broken our new Highliner Lodge record after catching a 375 pound halibut just four days ago.

Indeed, the fat lady hadn't sung yet... We have established a new record... Actually, we have shattered that record!

I believe we may have just broken the Alaska State record for a sport caught halibut. I don't know that we can prove this claim to get into the record books, but I will do some research to see what that entails.

This is a link to an Alaska Department of Fish & Game webpage describing Pacific Halibut:

On that page it is written that the Alaska State record is 459 pounds.

We did not weigh this fish, but used the length to weight conversion table published in the SE Alaskan tide book:

Here is the blow by blow report:

Kent Carmichael, from Kansas, gets a strong tug on his fishing line. He remembers not to try to set the circle hook! Big head shakes ensue. Kent tries to move the halibut, but can't really make any headway. The fish stubbornly refuses to move. He tightens the drag. After a few cranks up, the fish goes back to the bottom. A few more cranks and the fish goes to the bottom. Crank, crank...zzzzzt, zzzzzt, zzzzzt the fish goes back to the bottom! Up, down, up, down, up, up, down...for 15 minutes! Then the fish starts to move ...but it's moving towards the anchor gear!! (No captain wants to see a big halibut get tangled in the anchor line) Finally... Kent turns the fish and starts making headway, slowly bringing the halibut up the water column.

Forty-five minutes later, while Captain Zach is landing a forty pound halibut (did I say this was a triple header?) the fish starts to show... on the far side of the boat!? The “third” fish and Kent's BIG halibut are suddenly tangled together?! Elmo Carmichael (that is Kent's 89 year old dad) realizes his fish (the ”third” fish... is actually Kent's big halibut?! (Elmo's halibut got caught up in Kent's leader... you know, the one that has the BIG halibut... confusing? You should have been on the boat!) The fish won't come up any further, in fact, it decides to head for the bottom... right now! Kent and Elmo's line smoke off both reels at as fast as anyone has seen the line run before! Where will this big fish stop? Having just seen the boat (perhaps the only fish it has seen that is bigger than its self in many, many years) the fish keeps running toward the bottom!

Will it stop, or just keep on going?

Two rods, two backs, father and son... both finally slow the fish down, and it comes to a stop about half way down. 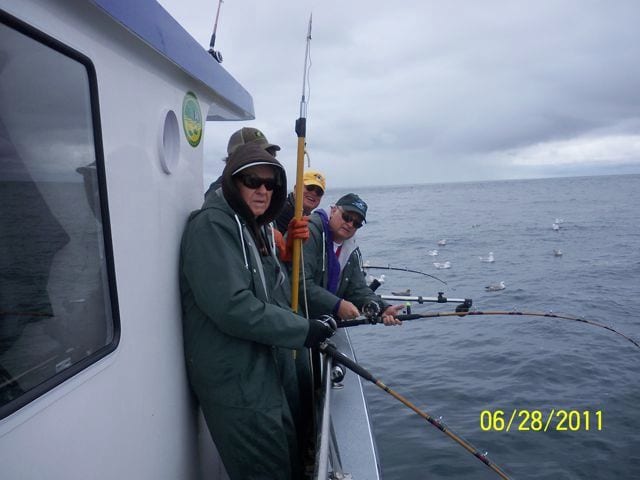 Every 3 or 4 minutes the fish would pull real hard on both lines, load up the rods until the drag started to release the pressure, and then arch it's back and "shake" it's head up till the line went slack and both rods straitened out (slack line!?) and then dive 20-50 feet. The was repeated over, and over... and over again.

After another 30 minutes, the fish appeared in the water again...

The harpoon was ready...the time had come...if mismanaged now, the fish might realize that it was time to GO!!

Zach, stuck the fish... not perfectly, but stuck her good...and pushed the harpoon shaft all the way to the hilt... What? It's too short?! The harpoon head wouldn't come out the other side of the head! The fish went crazy! Blood was everywhere in the water! The harpoon shaft bent 45 degrees! All that was holding the crazed fish was the two fishing lines... one wasn't even hooked into the fish, but wrapped several times around the other leader. Shit! Shit!! SHIT!!!

The fish was still struggling at the surface, when Zach had the presence of mind to stick the shark hook through the fish's lower jaw, and pull it out the mouth and then take a wrap around the line again! Now, either the rope would rip through the lower jaw of the fish... or the halibut was never going to see the bottom again!

It won't be an official record. We never weighed it. We did measure it very carefully several times. We held the tape in a strait line. It measured an honest 94 inches. It wasn't growing. We wouldn't cheat, or lie, about a halibut of this size. (Maybe a smaller, less significant fish, but not this fish) The tide book table said it was 466.2 pounds!! 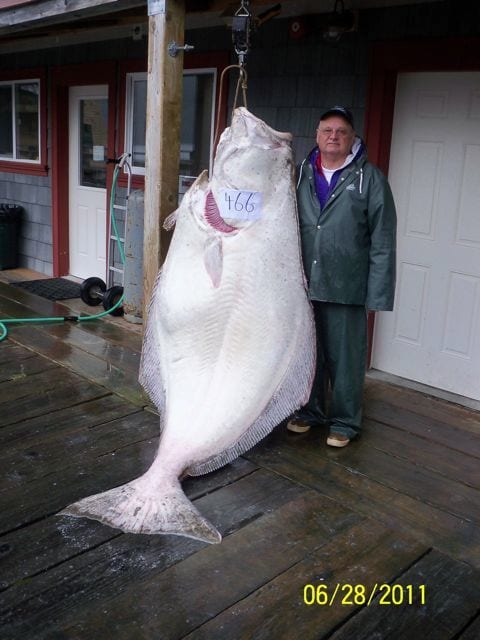 Kent: too tired to smile, or just "the way we pose in Kansas"? 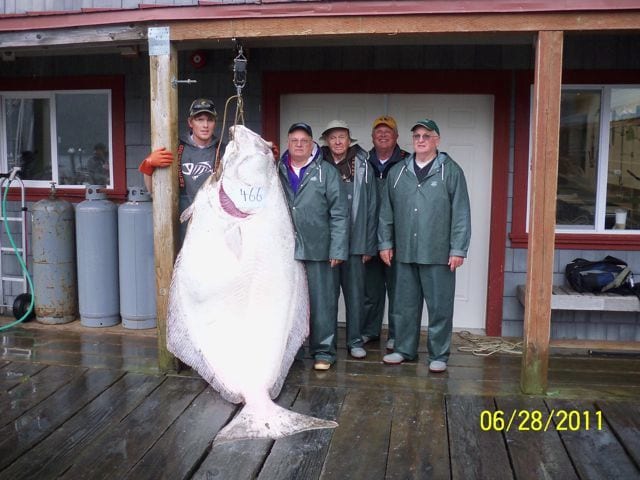 The forklift was being repaired, so we couldn't lift the big halibut any higher! Buzz is smiling, maybe he is from Missouri!

Kings! And now cohos showing, along with the record setting halibut, this group of 4 fisherman caught 15 cohos, 3 kings and 8 halibut (including the 466 pounder) in one day!

What are you waiting for? Book now and book often!