(not always an oxymoron)

While some folks might throw a dart on the chart to choose which stock to invest in, others take a practical, common sense approach to choosing an investment. Choosing where to fish can be approached in much the same way. I have constructed a rational argument for Highliner Lodge & Charters as the premier sport fishing destination in Alaska. No longer should you rely on insider tips or irrational exuberance when making this most important of life’s decisions!

I will present the facts and reasons. It is up to you to decide if this is an honest and compelling argument. If it is, it should trump any other reason to choose where to go for a great fishing experience at an Alaskan fishing lodge. 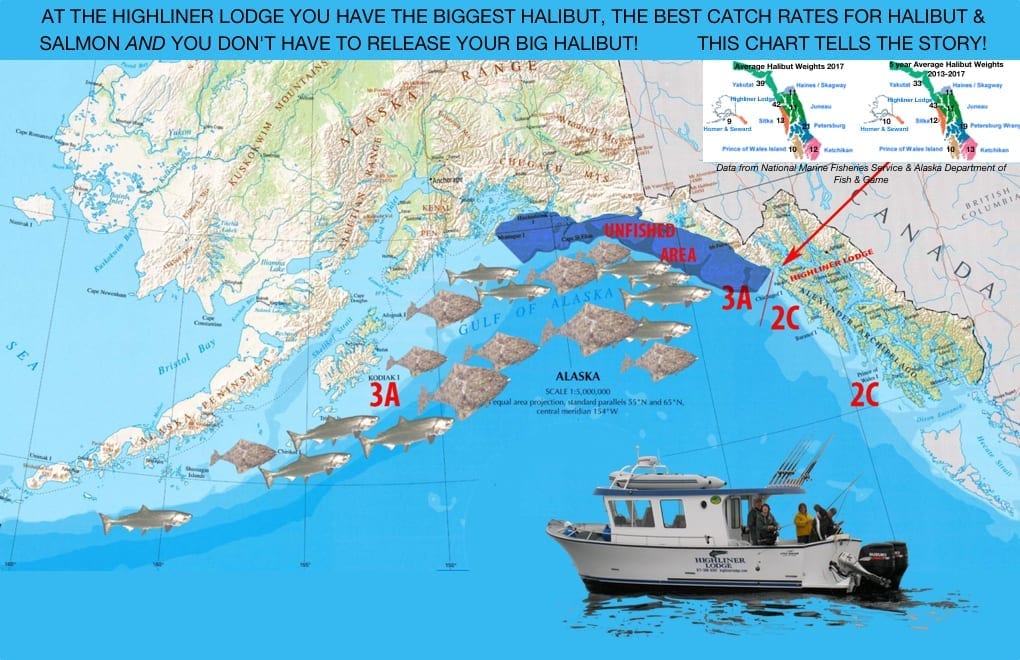 This chart shows the ageless annual migration of halibut and king salmon from the West to the East. Please look at the 400 mile-long UN-FISHED AREA shown on the chart in dark blue. This area is inaccessible to cruise ships, has no roads, no harbors and no cities… it has almost no fishing effort. King salmon and halibut aggregate here. The table above shows that the two areas closest to the un-fished 400 mile stretch have the biggest halibut in the state. We are on this migratory path, we are isolated and not overwhelmed by fishing pressure. We are first in line to catch the fish on this path. This is why our fish are bigger and our catch rates better than any other destination in the state. We also offer our guests an opportunity to keep halibut over the normal bag limits; halibut they would have to release if they were fishing at almost all other lodges. We have invested in, and converted, commercial halibut fishing rights into what is called “Guided Angler Fish” or GAF. Hundreds of our guests have been able to keep halibut above the restrictive bag and slot limits typical for Sitka, Seward and Homer!

The two areas closest to the un-fished 400-mile stretch (shown in dark blue on the chart to above) have the biggest halibut in the state. Coincidence? Not at all. It is attributable to biology and fishing pressure. There are still big halibut near Sitka, Seward, and Homer—lots of them. They are located where the fish are. The problem is that there are literally tens of thousands of fishermen fishing there! So, it shouldn't surprise anyone that the chances of actually catching a big halibut in those locations are now very low. That is why the average halibut caught there is only 15 lb. Our average halibut is over 40 pounds because we don't have the overwhelming fishing effort that they do. 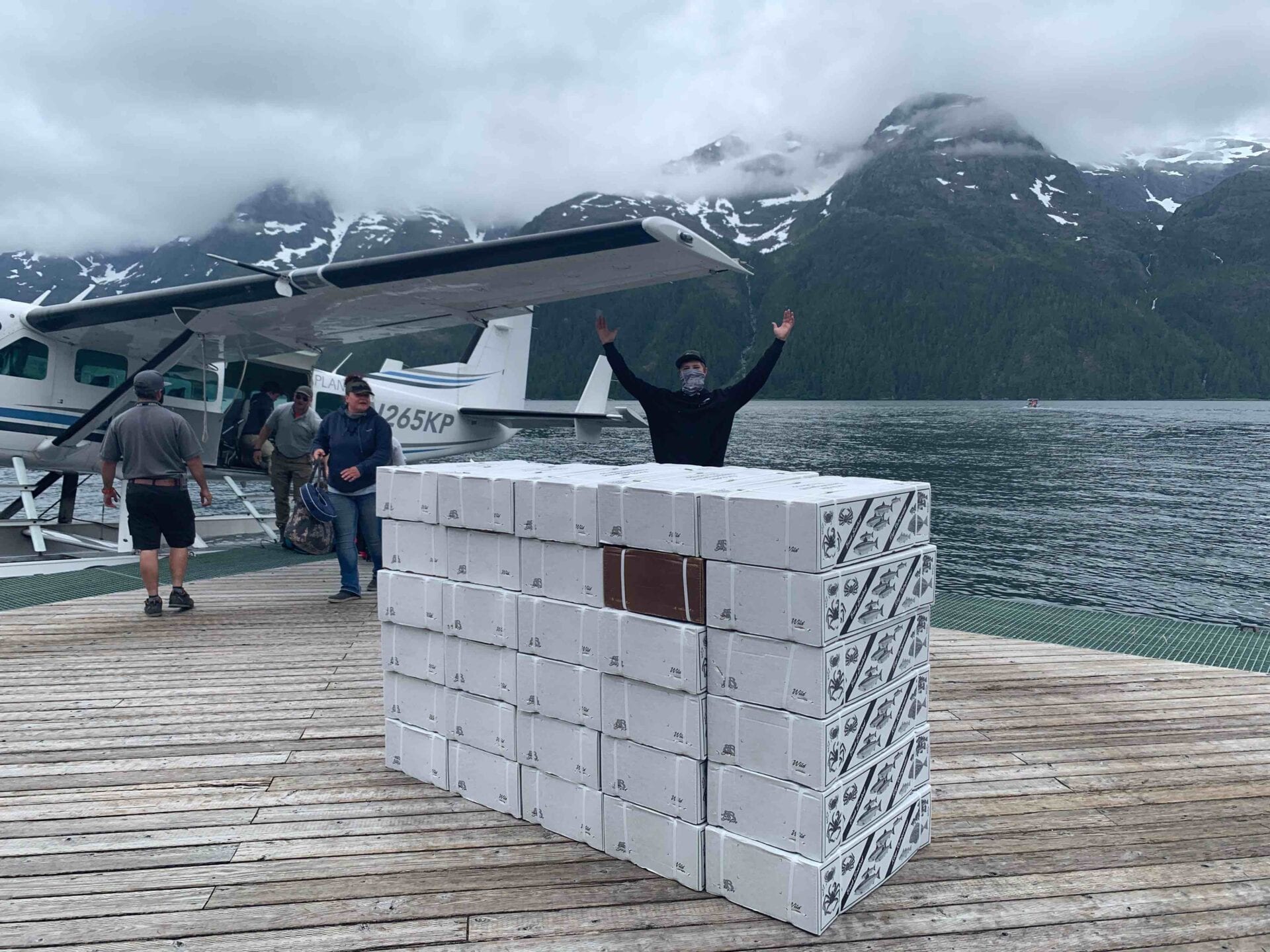 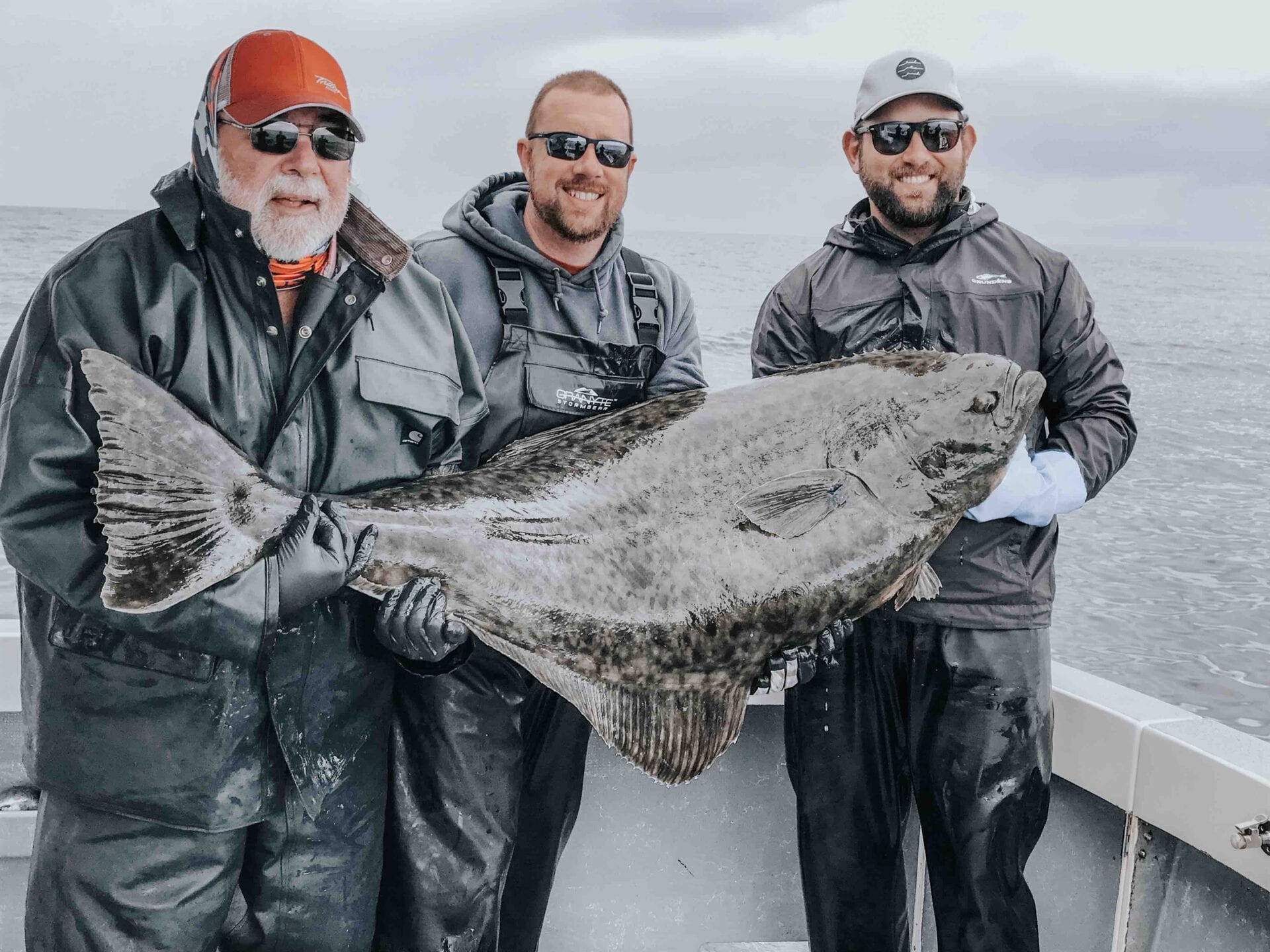 First, let's get our bearings.

Highliner Lodge is located in the tiny fishing town of Pelican, AK with the town slogan, "Closest to the fish!"  Our scenic "commute" from the protected waters of Pelican Harbor to the fishing grounds outside of the Lisianski Inlet is only about 30-45 minutes.

The International Pacific Halibut Commission (IPHC) defines the 2 regulatory areas near Highliner Lodge as Area 2C and Area 3A (hereafter, "2C" and "3A").

The chart below shows both regulatory areas that you will have access to at the Highliner Lodge as well as the current limits for each. 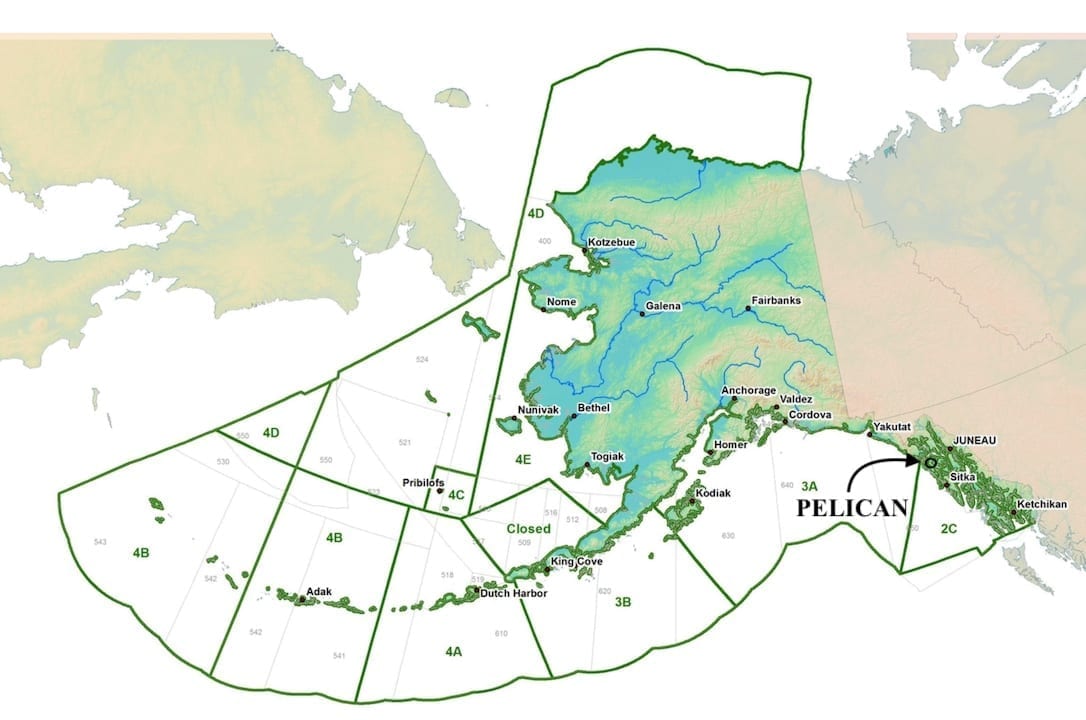 We have licenses to fish both areas for halibut (although not in the same day) and our guests have the choice to keep two halibut a day of any size in either area using our Guided Angler Fish (GAF)! 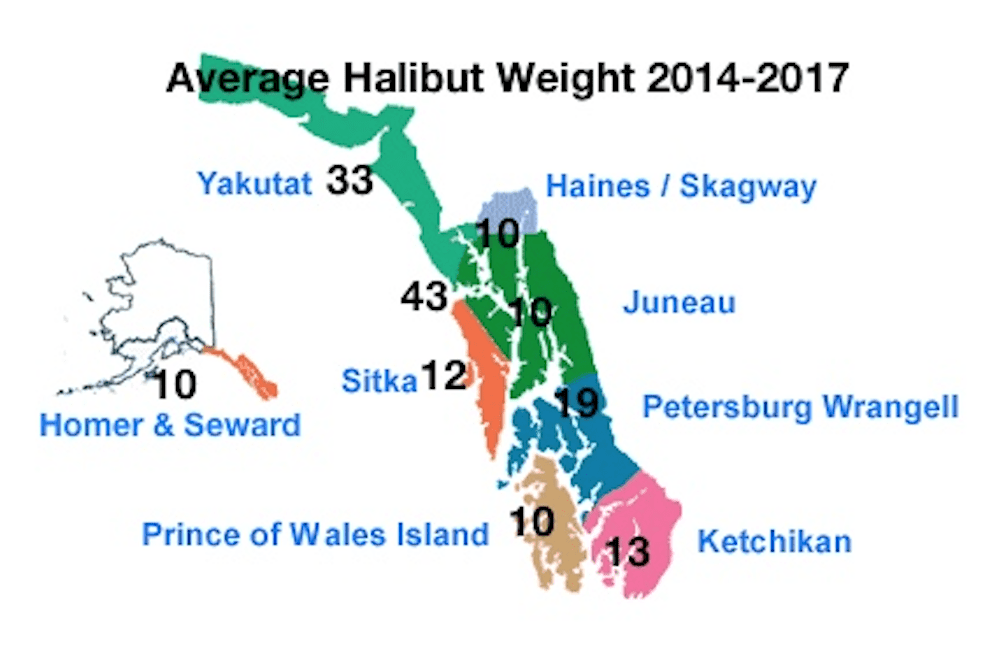 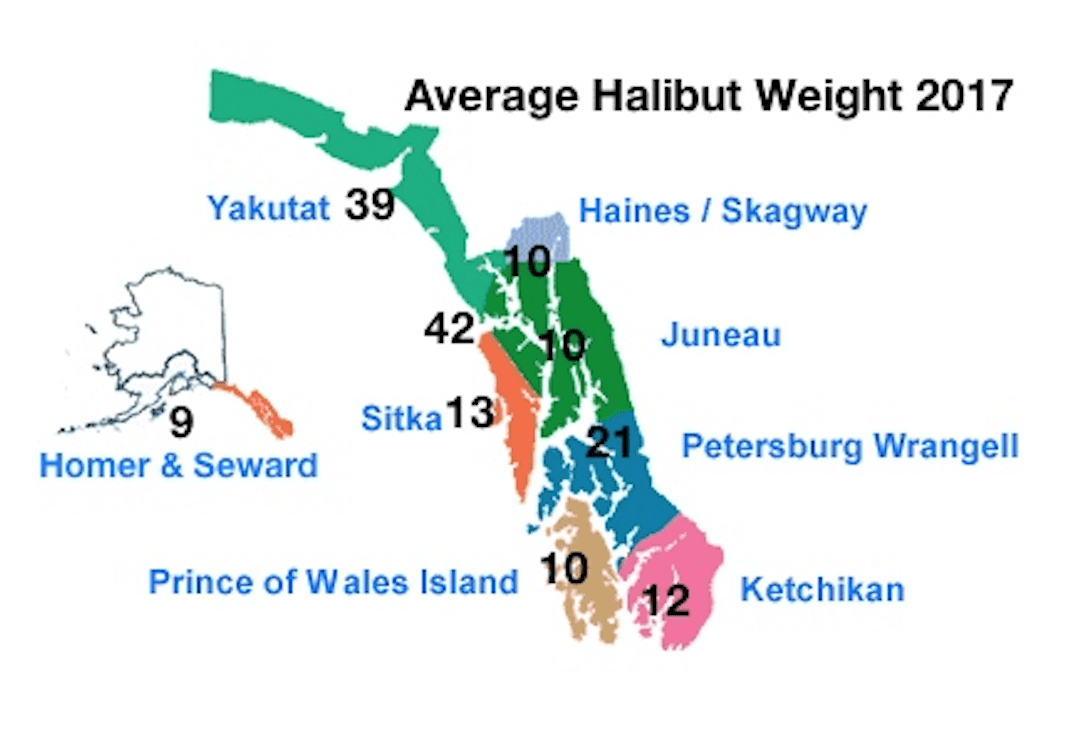 Above are the harvest estimates and average weights for halibut landed in the 3A and 2C regions of Glacier Bay, where we fish for halibut. I didn't just pick a spectacular year to illustrate this. Follow the ADFG links below to see their annual reports. The average weight of halibut landed in Glacier Bay is consistently highest year in and year out!

Need more proof? Be sure to stop by our 100-Pound Halibut Club page and check out our Trophy Shots Gallery! 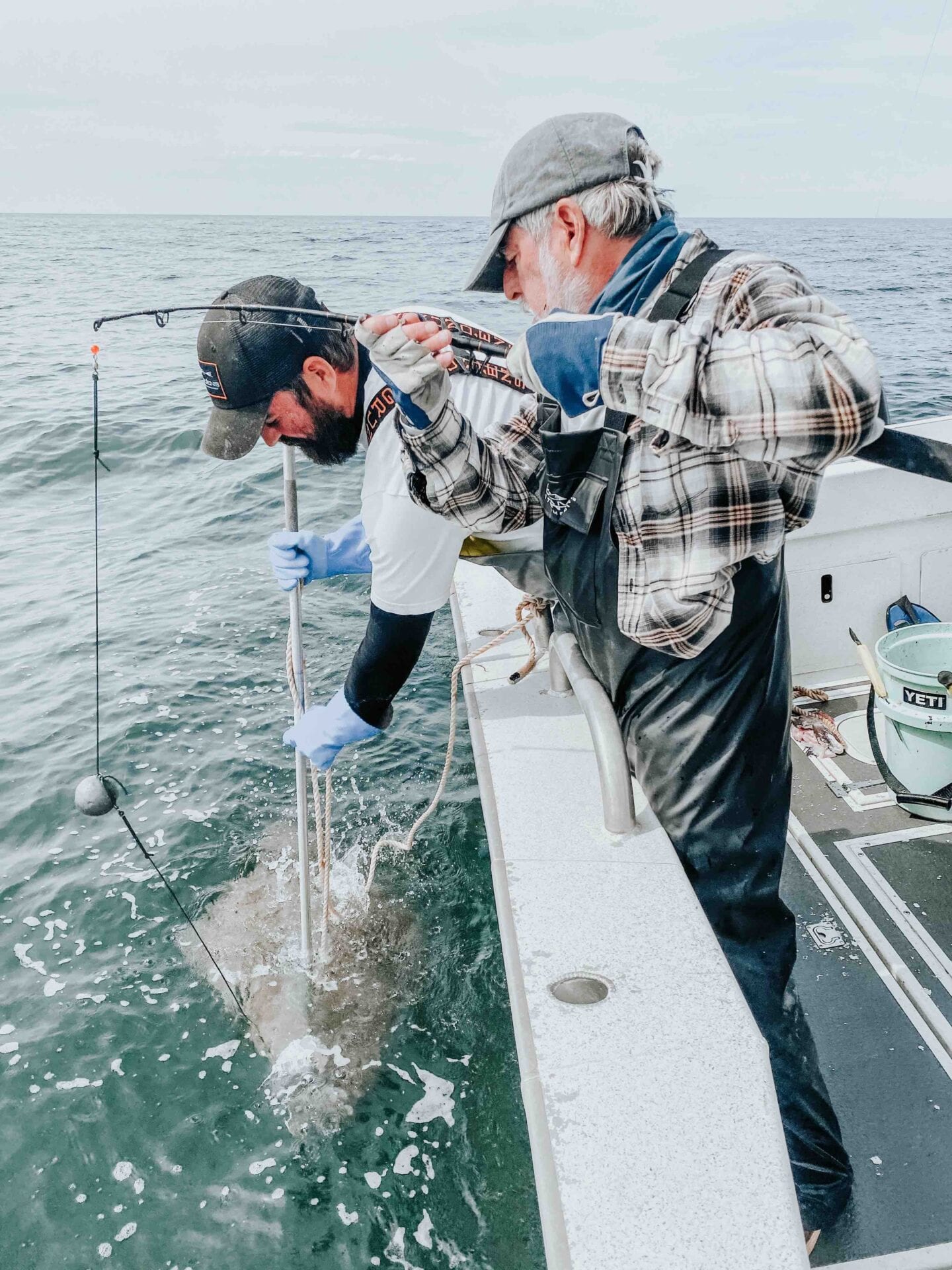 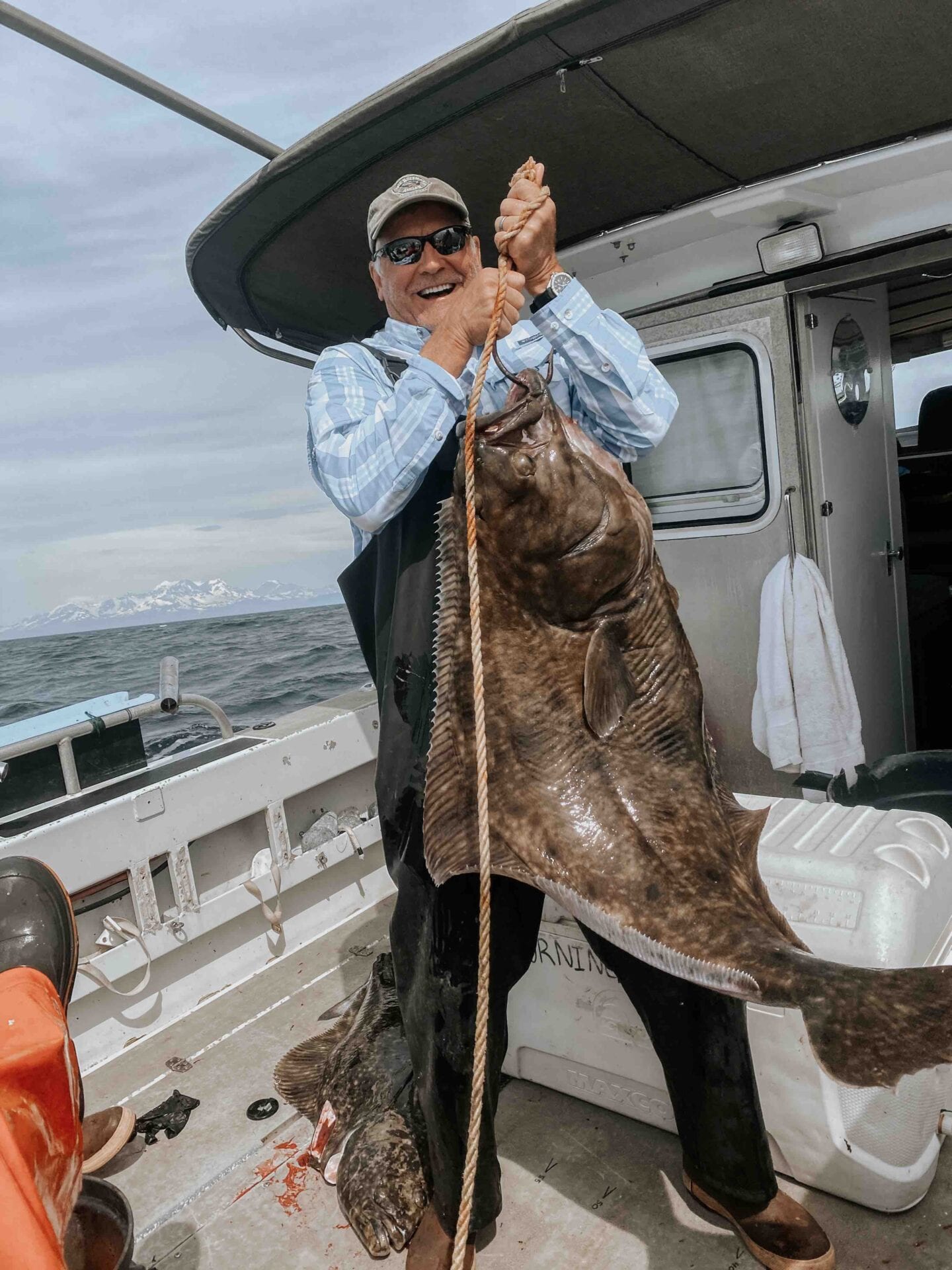 Our king salmon catch rate is 5 to 50 times greater on the outer coast than on the inner coastal areas of Southeast Alaska. A very large portion of the king salmon caught in Southeast Alaska was destined to spawn in British Columbia, Washington, Oregon, and California. Most of the Alaska king salmon are caught in the ocean and not near the hatcheries or streams where they will spawn. The closer to the ocean that you are, the more king salmon you will catch! Ketchikan, Juneau, and Petersburg have terrible king salmon fishing compared to Sitka, Craig, or Highliner Lodge. They are more than 100 miles from the ocean. The king salmon fishing has never been and will never be very good in those locations.

Below is a chart that we created using real catch data produced by the Alaska Department of Fish and Game. It shows the total number of sea-run king salmon caught and harvested by port, as well as the total angler days (unit of effort) between 2009-2018. The town of Pelican is too small to show up on this list. We troll for salmon near the mouth of the Lisianski Inlet, closest in region to Sitka, although we have far less competition in our area and we are first in line! 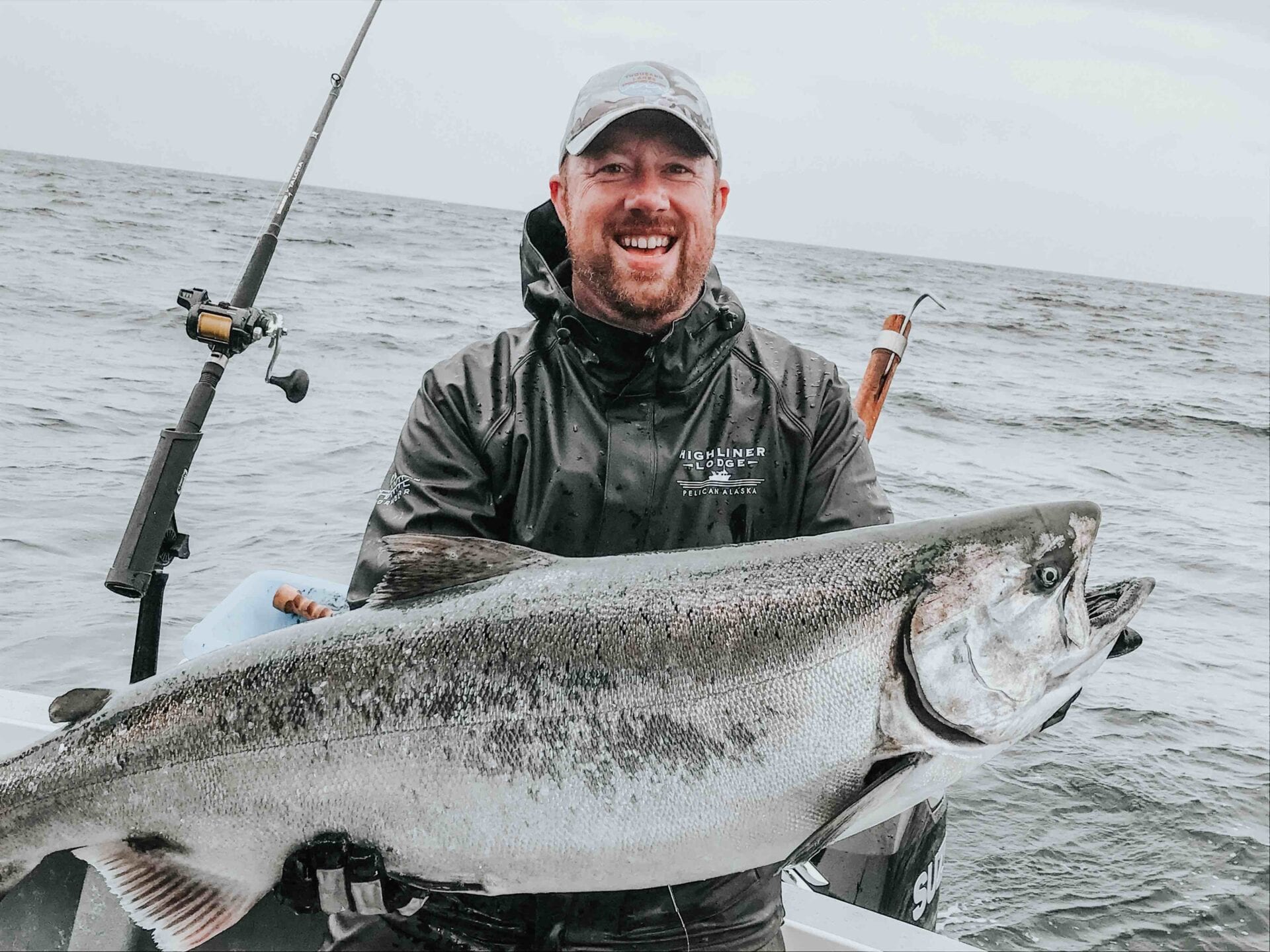 What really counts? How many fish you catch per hour!

Don't be distracted by the sheer volume of salmon caught in a particular port. It is NOT the overall catch that is critical; it is what YOU will catch. The catch per unit of effort (per angler day or per rod hour) is the only thing that matters.

The data in this spreadsheet represents the whole season. Not only are we first in line before even Sitka, but if you choose more optimal dates with us to target king salmon, your actual catch rate could be significantly higher than what is represented here. Kings in our area are most abundant in May and June, although we continue to catch them throughout the entire season.

Why can’t I show you a harvest rate table for Pelican? Because the fishing effort is so small that we are virtually invisible to the ADF&G, and they don’t bother to compile a table for our area. Please let me know if you'd like any further information. I have charts for most areas of Alaska.

What happens when you are in a good location, but too many fishermen go there?

Angler effort is illustrated on the chart below for Alaska and British Columbia. The bigger the dot, the worse the fishing! 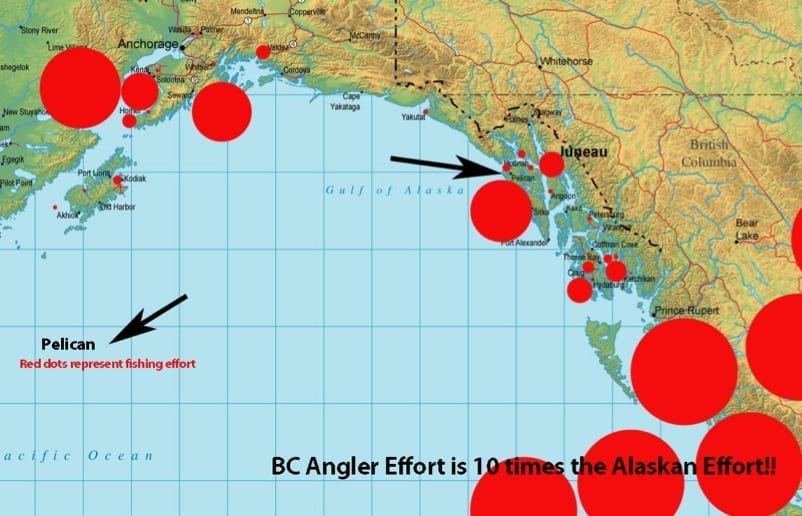 Pelican (Highliner Lodge and Charters Inc.) is located where the arrow that points to the east is pointing. The effort in Sitka, Homer, or Seward dwarfs that of Pelican. There is about 50 times more fishing effort in each of those ports than in Pelican!

Other places are so far away from the Gulf of Alaska that they just don't have an abundance of halibut or salmon. They never did. They never will. They are not on the migratory pathway of these fish.

Some locations are on the pathway but sadly for them, they are last in line. California is last in line to catch even its own king salmon. They are caught in Alaska first, in British Columbia second, then Washington and Oregon.

If you are from California, you know what I'm talking about! So even if a fishing lodge is isolated and doesn't have overwhelming fishing effort, they will catch very little fish if they are off the migratory pathway and/or last in line.

We are on the migratory path! We are also isolated, not overwhelmed by fishing pressure, AND we are first in line!

DON'T USE THIS CHART!

This is the generic chart that you will see on almost every other website. Those charts are worthless at best and downright misleading most of the time!

Charts like this one are an amalgam of all salmon fishing in all of Alaska. There is usually very little correlation between the fishing at that particular lodge and the chart. After comparing our catch rates and the Juneau area catch rate on the charts above, you can see how meaningless and downright misleading this chart is.

The distance between Highliner Lodge & Charters and Juneau is about 100 miles (as the fish swims). Our catch rate far exceeds Juneau's because we are located very near the Gulf of Alaska, and we are north of all of the other fishing areas in Southeast Alaska.

I can present charts from every other area of Southeast Alaska and make the same point. The catch rate in our area exceeds all other areas by 2 to 15 times! Our catch rate is equal to—or better than—Sitka’s because of our location and lack of competition.

Where do you get your information? How do I know that it is reliable?

All of my data is taken from the Alaska Department of Fish and Game (ADF&G) or the National Marine Fisheries Service (NMFS) websites.

If you still don't believe me, please visit the ADF&G website and take a look. How come other lodges don't encourage you to look at the actual catch data? Well, I'll let you answer that one yourself!